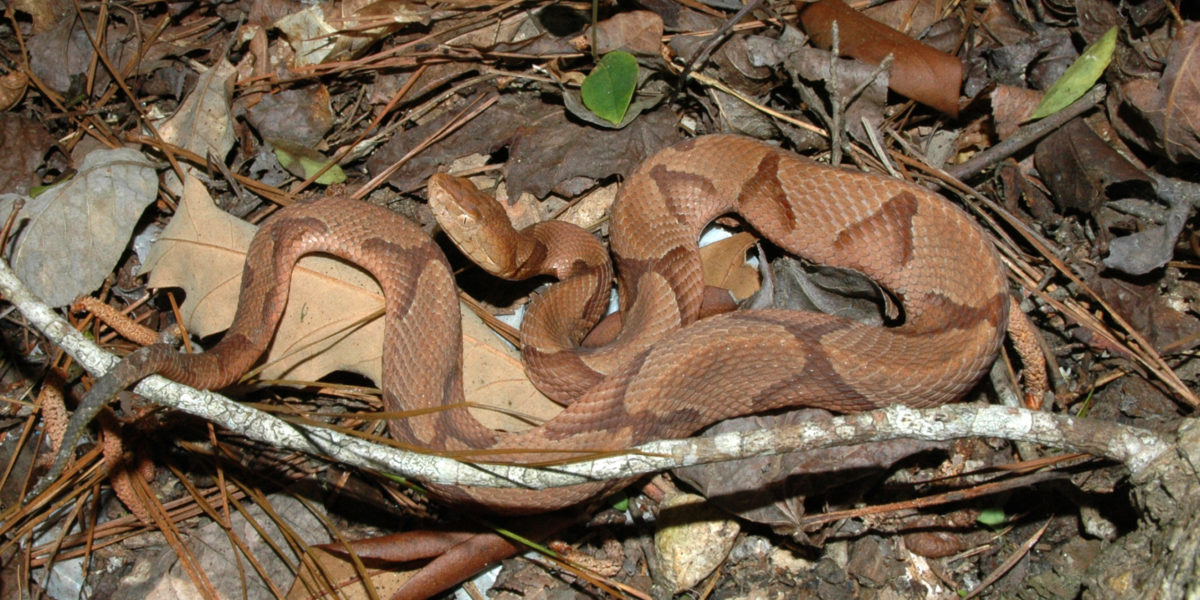 How Snakes Get Into The Home

Snakes enter the home through gaps under doors, windows, holes in the attic, eaves, garage, shed walls, weatherstripping, or cracks in the foundation. The prefer places they cannot be seen like tall grass, overgrown gardens, shrubs or bushes, piles of leaves, wood, and bricks.

There are 40+ species of non-venomous snakes in Florida including black racers, garden snakes, grass snakes, king snakes, and rat snakes. These snakes rarely pose a threat to children or your pets and should be left to slither away on their own. However, care must be taken with venomous snakes. If you cannot tell the difference between the two, leave the snake alone and contact us for identification and removal of the snake from your home. We’re happy to humanely remove the snake quickly and safely, so you can get back to your day-to-day.

The Dusky Pigmy Rattlesnake is the most common venomous snake in Florida. This rattlesnake is grey with black blotches and a dotted red to orange line running down the middle of the back making it blend in exceptionally well with ground cover. Dusky Pigmy Rattlesnakes diet consists mainly of frogs, lizards, salamanders, and small rodents. The rattle at the end of its tail is small, slender, and does not produce much noise. They are between 14″ an 30″ in length, do not let their small size fool you. They will act much larger and will be aggressive when disturbed. Thankfully, they have rather mild venom compared to other rattlesnakes in Florida. Their bites are very painful but are rarely a threat to human life.

Eastern Coral Snakes are between 25″ and 36″ in length and are easy to identify by their black, yellow, and red ringed color pattern. They are relatives of the sea snake, cobra, and mamba, spending most of their lives in burrows or under leaf piles. Coral snakes diet consists of amphibians, lizards, and other snakes, including coral snakes. Eastern Coral Snakes are reclusive and only bite humans when handled or stepped on. However, these bites are very dangerous, with 20% of all bites being fatal. Bites differ from other venomous species as there is little pain or swelling at the time of the bite. After 12-18 hours, untreated victims begin showing symptoms of double vision, muscular paralysis, and slurred speech, eventually ending in respiratory or cardiac failure.

Eastern Diamondback Rattlesnakes are the largest venomous snake in Florida averaging in size between 3 and 6 feet. These snakes feed on birds, gophers, mice, rabbits, rats, and squirrels. They are found all over Florida, and even babies have enough venom to kill an adult. Bites are described as two red-hot needles, with bleeding from the bite site followed by intense pain, swelling and discoloration of the affected limb, low blood pressure, bleeding from the mouth, and weak pulse which leads to cardiac failure. Due to their large size, these snakes have a great deal of venom and bites are fatal 20% of the time.

Water Moccasins also known as Cottonmouths are widely known for their aggressive nature and white-mouthed defensive display. Ranging in color from brown, olive, tan, yellow, or grey and between 30″ to 70″ in length, they are the most venomous aquatic snake. Cottonmouths feed on amphibians, birds, fish, reptiles, small mammals, and other snakes including Water Moccasins. Cottonmouth venom is similar to rattlesnake venom and breaks down blood cells, preventing the blood from clotting leading to temporary or permanent tissue and muscle damage, and internal bleeding.

The Southern Copperhead will not hesitate to bite and is largely responsible for rattlesnake bites in Florida. Most bites are a reaction strike, occurring when a victim gets too close or the snake is accidentally stepped on. Symptoms include swelling, weakness, vomiting and breathing difficulty. Adults are between 24″-40″ in length and their reddish-brown copper patterns make them incredibly hard to spot in the wild. Copperheads feed on birds, frogs and lizards.

Any snake can be aggressive, and snakes will defend themselves if they feel threatened. If you are unable to identify a snake, treat it as if it were venomous and call a professional. Proper humane snake removal requires specialists who are highly trained to deal with the behavior and living patterns of snakes, both venomous and non-venomous. We have proven, effective, humane, and cost-efficient methods for dealing with snakes. We practice snake exclusion, which is the humane way to trap and relocate an animal into its natural habitat. Your state-licensed technician will identify all the entry points and provide cost-effective solutions that prevent future pests from entering the home.

Our Promise To You